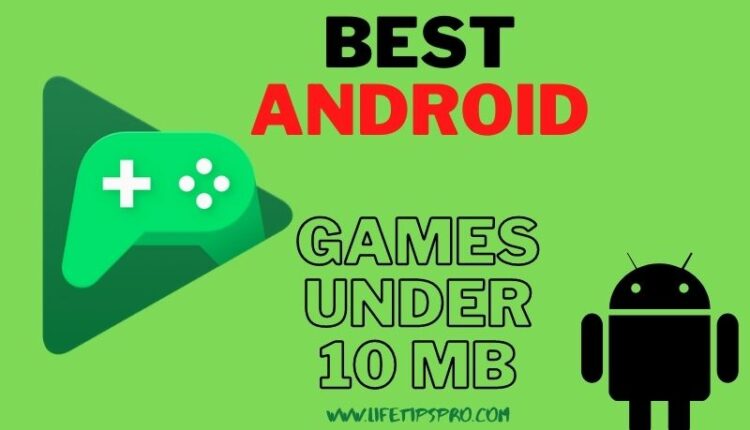 Being the most used operating system unveils huge compatibility across devices. If we jump into the current android statistics, around 90 percent of people opt for greater than 32 GB of space mobile with the android operating system. All applications in the google play store have increased multiple features and compatibility in their apps so the size of the application getting increased day by day. Every new update of the application brings new features with a little more space on your mobile.

Today we would like to bring out some of the light android games which will help you when you are bored and don’t affect much on your mobile space. We have made out this list after analyzing all the applications available in the play store. Feel free to add your own views in the comments section and we will be respecting your views as ours. Let’s jump down to the list and explore the best and light android games.

We(LTP Team) are in no way affiliated with the below-linked games and all these are listed based on our personal experiences.

This is the best android game application as per my experience to kill time when you are bored. On the other side, it’s really very light on your mobile space. It doesn’t cross even 10 MB of application size which is equivalent to maintaining two HDR pics captured on your phone.

Also, the concept behind this application is so innovative and even makes you think more while killing time. At one point in time, I got completely addicted to this game and used to play it once a day at least. 2048 game developer has integrated multiple features in the application and made it much easier for us to play with numbers.

The name SUDOKO is very famous and we used to collect paper cuttings of sudoku game in my childhood to play this game. Now the world has been digitalized and paper games became history. I completely suggest you go for this game as it provokes your creativity and intelligence instead of addicting you to the phones. Also, this application is very light on your phone as 2040 and I can assure you that you will start loving numbers once you excel in this game.

Moreover, it’s not about numbers it’s about how you place them to get your desired result. As per WHO, Sudoku improves your knowledge and IQ compared to other games. It also got multiple pre-installed themes and tips from the developer to complete the game.

Chess is popularly known as the great master game and this game completely concentrates on strategies. In the 21st generation, everyone needs to have a great strategy to be in a great position and if you are looking to boost up your strategical thinking then chess is the first and best step as it helps in improving your thinking. On the other side, the chess game is very light on your mobile space and won’t even occupy much space.

I suggest all youngsters play chess instead of action games as chess helps in creative and strategical thinking. Moreover, chess game developer adds different modes such as easy, medium and hard to help all kinds of players. Also, the moves are not the same every time and they will be changing based on the opponent’s moves.

People are always interested in action games rather than innovative games. The android action games market is increasing every year by 10.2 percent and street fighting2 is one of the best action games with cool graphics under 10 MB.

This game has got a lot of interesting stuff with amazing gameplay and all of that in under 10 MB of space. The game developer has integrated multiple themes to give you a different feel every time you play the game.

Stick man name is much familiar for lightweight games. Stick cricket has gained huge popularity considering its simple graphics and lightweight but in order to cater high-end features, companies tend to increase their application size but stick man fight is the one that serves its purpose under 10 MB.

The stick-man fight game won’t be having amazing graphics but the gameplay is amazing. You can try it out if you are looking for some action game with good gameplay.

Bike Xtreme game is a racing game with amazing graphics along with multiple riding tracks. Mountain rides are always adventurous and this game will make you stick to it if you like mountain rides. Along with the great rides, it also offers multiple customizations, themes, and costumes, and all these are kept under 10MB which is a great achievement for the developer.

You can even purchase different bikes, costumes, and other styling accessories if you are interested to ramp up your game with different looks.

Zombie games always keep your adrenaline high as they scare you a lot with unexpected entries. This Zombie game 2 is one among them with a good-looking interface and scary sounds. Gameplay was designed in such a way that you will be stuck to the screen all the time to kill the zombies and driving on them.

This game is designed with easy controls so that even kids can play this game easily and You are supposed to save your friends from zombies. Along with that, you will be given multiple four-wheeler options to choose and you can pick them based on your interest.

This is the second zombie game on the list and this game comes with endless story mode as you need to kill the dangerous coming zombies. Shooting is always fun and killing those dangerous zombies doubles your fun.

You can play this game in three different zombie worlds which is again the greatest advantage for this game.

Driving on phones is much interesting and easier compared to driving on roads. If you are a great driver and looking for some crazy driving stunts, then Dr Driving application is for you. This is one of the most downloaded games on the google play store and the interface is amazing for this game.

Once you download the game, you will get to know the amazing user interface with cool graphics which are kept under 10 MB of space. I just kept it at last in order to promote creative games first.

You can try out all these games and even if you download all the above games, it won’t cross 100 MB of the size which is negligible for 64 GB and above storage android phones. We have listed down based on creativity games first followed by action and graphics. All the above-listed games are picked based on their ratings and size. Do drop down your views in the below comments section and we will be hanging around to answer your queries if you have any.

Do drop your email address in the below subscription box or sidebar to get all the latest updates delivered directly to your mailbox for free. Have a great time ahead and stay safe

Best Slam Book Messages For Friends – How To Write

How To Create Happiness Around You

What Are the Advantages of Using An AC Service?