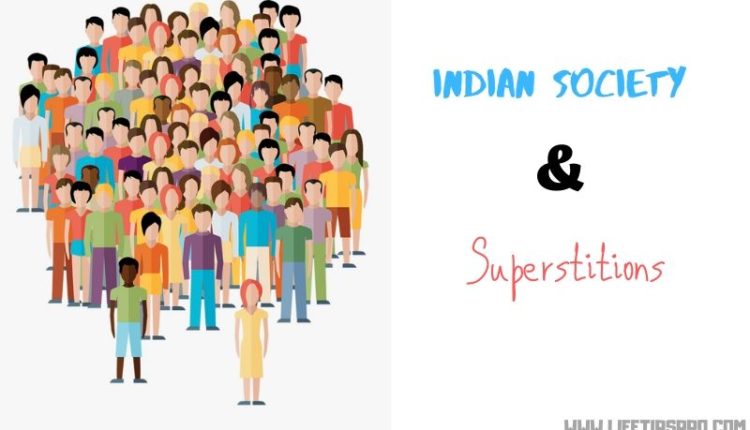 How Indian Society May Be Curbing Your Growth

Indian society is well known for its famous traditions, beliefs, and superstitious beliefs. There are tons of beliefs that Indians believe in their daily life cycle starting from the “cat brings bad things around” to “Swinging legs would cause stomach ache to their uncles”. Many great people have tried to bring out the people from these superstitious beliefs and few of them succeeded but there are tons of them still left behind mostly in rural parts of India.

Disclaimer- I am not against India and I love my country but people and traditions have to change based on the current generation to take the country further. In some rural parts of India, they are still following the cultures which our ancestors used to follow in the 1800s. I hope this helps the current generation to understand and at least they will put an end to some of these cultures.

India is a developing nation since my childhood and the famous writer once said that “Your beliefs decide your future” and we are believing superstitions so that makes our future. Ancient people have called out for all these beliefs based on their lifecycle and scenarios they faced. But things got changed and we need to understand the effect of these superstitions on our daily lives.

Below are some of the crazy superstitions that Indians believe.

I was very much shocked when my neighbor told me this myth. People have to understand that baby health depends on the DNA of both parents but not on the caste. I agree that the same caste might be having similar DNA which doesn’t cause an unhealthy fetus but that doesn’t mean that un similar DNA results in unhealthy children. To be precise, everyone’s DNA is different and this myth was forced on people in the early 90’s to make sure that no one encourages inter-caste marriages. Most of the communities in India doesn’t encourage inter-caste or inter-community marriages and we have to understand that two people will stay in the house and not the whole community and if those two people are happy that’s what their parents should look for and not the comments of other illiterate community members.

I am neither supporter or opposer of any inter-caste marriages but I feel this limit has to be taken off in love marriages.

Work More To Get Paid More-

In order to get high wages, Indian society made your mindset to work very hard. Indian workspace has become like 1 out of 10 very hard working guy gets good incentives whereas the United States workspace is like 1 out of 1 working guy gets good incentives. This very hard working nature of Indians has taken Indians to the next level in foreign countries and made them stakeholders, CEO’s and Directors whereas people staying in India are taking huge work stress and making themselves prone to multiple disorders. I personally don’t feel that your payment is not greater than your health. Always do remember that HEALTH IS WEALTH and if you maintain good health then you can earn at some point in time in the future.

If this concept works then the carpenter should earn more than a CEO as the carpenter keeps working all day to deliver his committed works.

Indians are not good with ages greater than 30, they feel that after 30 your life is almost completed. So, every good thing has to happen before 30 else they will be horrified and worried.

It starts with a career and applies to every occasion including making babies. People should start believing that age is just a number and you can achieve whatever you want in life even after ’30s. So, keep your hopes up and go in the direction of success and one day you will prove everyone around you is wrong.

You Should Choose Between Engineer Or Doctor

Indian parents are very much interested in making their child an engineer or doctor and remaining all professions are not worthy as per them. A scientist or astrophysicist will have more work satisfaction than an engineer, who works on excel sheets to impress clients of their company.

Sports have a huge scope in India but parents don’t want their kids to excel in sports as they can’t tolerate any wounds to their children. Due to this more love, many children are losing great careers. I highly suggest you engage your children in sports or physics or chemistry and they will serve their own country.

All the above mentioned are not the sins of any Indian but they fit used to it because of the traditions they followed from their older generations. Around 3 decades back, it might be right to follow all these but based on the current generation we have to adjust and change our traditions accordingly.

Drop your comments in the section below and we would love to understand the difficulties you came across due to some Indian cultures. Have a great day and cheers.

How To Make Fortune Through Psychic Readings?