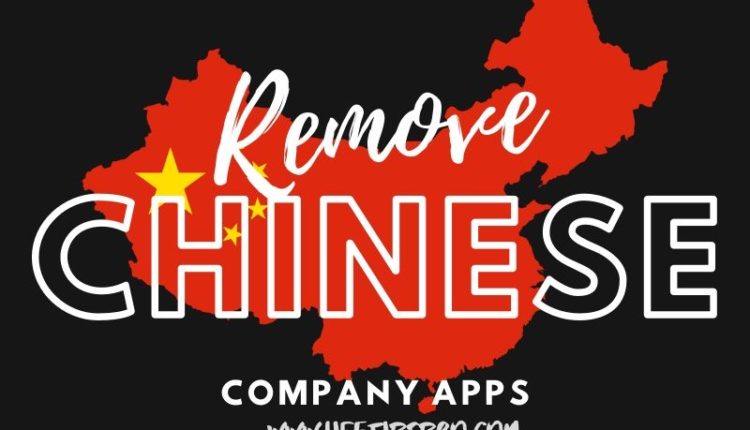 Chinese Applications List And How Can We Remove From Our Phones

China became popular with the pandemic COVID-19 virus and the world is blaming China for irresponsible behavior during transmission phases and for not revealing the facts on time to the world. COVID-19 is almost taken around 400k death to its account and it’s still counting until the approved vaccine makes the way. The United States being the most developed nation taken the biggest hit among all the countries and sacrificed around 150k people to this deadly virus. People across the world are protesting against china for hiding the facts during the first phase of transmission and removing Chinese applications from their phones or applications made by Chinese companies.

How to unblock (Or) Hack school wifi using android, iOS or…

Below are the 59 applications banned in India by GOI –

Coronavirus is known to be transmitted from bats to humans and originated in Wuhan city, China for the first time in December 2019. Chinese people usually eat bats and the virus was transmitted from the affected bat to the humans. This virus is linked to NOVEL VIRUSES Family which causes respiratory issues and leads to death in severe cases. 2020 is the year which can never be forgotten by 21st-century people as the virus completely changed the lifestyle, work culture, and crashed all economies.

Why people are blaming China ?

China is the First Nation, which seen this virus transmitted from bats hidden the basic truth of its transmission capabilities. It has a very high rate of transmission through different means and WHO also stated that there is no solid evidence of human to human transmission in January which is a completely false statement from the responsible organization.

On 31 December 2019, the WHO China Country Office was informed of cases of pneumonia of unknown etiology (unknown cause) detected in Wuhan City, Hubei Province of China. … Based on the preliminary information from the Chinese investigation team, no evidence of significant human-to-human transmission and no health care worker infections have been reported. — Source Link

Virus eruptions are rare and the virus erupted nation has to alert the other countries immediately whenever they see the human to human transmission and all modes of transportation have to be suspended immediately from in and out of the virus erupted nation. China hasn’t taken care of these steps and the virus first case was observed in December 2019 (As per Chinese officials but not sure about the real date as they hide the facts) and the transportation was stopped in Mid February by which the virus has transported to all the countries. As of today, more than 200 countries contained the virus and almost all the countries economy has been drastically affected and billions of people across the world lost their jobs.

Is there any real mistake of China ?

If we think from the Chinese government perspective, stopping all transportations in December or January would have made only China take the big hit of this virus, and WHO can donate their funds to this pandemic by collecting from the other countries.

Now the situation across the world is out of control and many countries are under lockdown and people have started ignoring their life’s and if it continues further for 6 more months with the same deaths every day then the crime rate across the world increases as the value of the life decreases and money value goes down and the whole world economy collapses. The country with the highest criminals rule the world and many small countries will be taken over by mafia or bigger nations. China is trying to take over Hong Kong and passing some vigilant laws in the shades of this pandemic.

Applications Made By China People

United States of America(USA) and Indian society are highly focused on teaching a lesson to China by banning most of the Chinese products and imposing huge taxes on exports from the US. If the whole world takes the same stand then China can’t withstand the losses and the current government has to be dissolved and replaced by the new government in order to stop the chaos.

Below are the list of chines companies and applications made by china people. In the right side image, we have listed out the alternative applications for the existing chinese popular applications in play store or app store.

Update – Google has removed Remove China Apps from the Google play store and deleted the negative ratings of Tiktok application from Indian users. It looks like Google has joined with China in protecting their revenue.

There are many people who might be wondering how removing Chinese applications affect the China government. When you remove the applications, the companies lose user base due to which revenue generated from ads and sales will be decreased and it results in losses for the company.

Consider Tiktok application as an example, it was downloaded around 191 Million times in 2019 and every user watches around 6-10 advertisements per day which will be around 2 Billion advertisement views. On average, 2B advertisement views will generate at least 5-10 Million USD. This is just from the advertisements and there is a lot more to look after. If all these downloads are stopped then around 40-50 Million losses have to be taken by the ByteDance company which will result in job cuts in China and the company evaluation will be reduced and the taxes company pay to government will also be reduced. So, on the whole, you are sitting in the home and destroying China government’s economy by not using Chinese company applications.

We cannot migrate immediately and some might be the mandatory products which we have to use on a daily basis but some entertainment applications can be removed or replaced with the list provided above.

Do let us know your views in the comments section below and we will be hanging around to answer your queries or doubts. Also drop your email address in the below subscription box or sidebar to get all latest updates directly delivered to your mailbox for free.

How To Make Most Out Of Yoast SEO Plugin